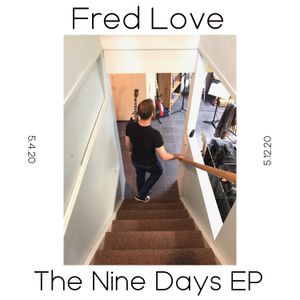 Iowa singer-songwriter Fred Love has announced the June 12 release of a new five-song EP recorded entirely in his basement.

The Nine Days EP showcases a songwriter facing up to the COVID-19 pandemic and its effects on his family, mental health and career almost in real time. Rather than wait until the crisis had passed to get into a proper recording studio, Love decided to try his hand at recording the set himself on his laptop computer. The effort resulted in an immediate and unvarnished Americana record animated by Love’s commitment to creativity and the DIY ethic.

Most of the recording took place in the first half of May 2020. Love composed three of the five songs featured on the EP as a direct result of his experience during the pandemic. The songs center on the strain of sheltering in place with his wife and two young children but are also balanced by moments of gratitude and love.

“My wife and I started working from home soon after the first outbreaks in the United States,” Love said. “That means we’ve been balancing our jobs with schooling our 8-year-old son and taking care of our 3-year-old daughter all at the same time. It’s been a major challenge, but we’re also thankful that we’re still healthy and have jobs that allow us that kind of flexibility. All those thoughts came through in the lyrics of the EP.”

“Wapsie Crescent Moon,” the EP’s third track, finds the narrator longing for a simpler time, before the fear and strain of the pandemic, when excitement meant sneaking down to the Wapsipinicon River at night to meet a high school sweetheart. And “Nine Days,” the fourth track, explores Love’s thoughts on Easter Sunday falling in the middle of a deadly viral outbreak.

Love performed, recorded and mixed the EP on his own with the powered mixer and microphones he uses for live shows and the recording software on his MacBook Pro. Bryon Dudley, a veteran Ames musician and owner of the Spacement recording studio, mastered the finished songs.

Love said he admires the DIY ethos and fierce independence of pioneering punk and alternative acts, and that spirit inspired his approach to The Nine Days EP.

Two songs from the EP, “Wapsie Crescent Moon” and “All To Myself,” are available on Love’s Soundcloud page. The entire EP will drop on digital streaming services on June 12.

Fred Love is a veteran of the central Iowa Music scene. The Nine Days EP is his first official release since his solo debut album, 2017’s Lily of the Valley. His previous band, the Colt Walkers, released one full-length album, Trail of Blood and Broken Hearts, in 2015. Love currently lives in Ames.