I've decided to take a chance on myself.

After four years of pouring my creative energy into an Americana band, it looks like circumstances have shifted. But that itch -- that compulsion -- to play guitar and sing and connect with folks remains. In fact, after a slow start to 2016, that drive to make music has only sharpened.

So, for the first time in my 30 years on planet Earth, I'm going to make a serious go as a solo artist. I've written some new songs, booked some new shows and rearranged all my musical goals. Everything from scratch. Everything by hand.

Honestly, that scares the hell out of me.

Somehow, the idea of putting a song out into the world under my own name intimidates me much more than putting out a song under a band name.

But the idea of packing it in and calling it quits, letting my guitar and amp and voice go quiet, scares me even more.

So I've decided to put it all on the line. With my name on it.  I could easily go down in flames, but at least I'll know. At least I'll have taken a chance on myself.

Thanks for visiting my new website. I hope you find something here to enjoy, and I hope you'll join me for this little experiment.

All the best,
Fred 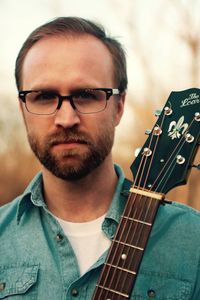